English Weirdness: Can Plastic Own the Fork?

Not long ago, I was eating a lunch at a fast food place. The tables were tiny in this place, so with my chili fries and hamburger taking up most of the space, it was only a matter of time before something fell off the table. It was the fork that came with my meal combo that went over the edge and tumbled to the floor, which I have to say wasn’t all that clean.

Fortunately, a young man sitting adjacent to me at the next table, saw this happen and volunteered some assistance. Apparently, they had given him some extra cutlery. Empathizing with my misfortune and my inability to now shovel fries into my mouth, he came to the rescue. With an accent I recognized as Korean, he said:

His kindness was certainly impressive. But, I noticed as we English instructors often do, so were his grammatical errors. There was the absence of both the ‘do‘ auxiliary and the verb compliment ‘to use.‘ Most notable, however, was his misuse of the structure relating to the fork. The young man had mistakenly applied the apostrophe + ‘s’ structure to the word “plastic,” as though the plastic held the fork in its possession. But does this make any sense? Can plastic own the fork? And if it can’t, why would he, or anyone else for that matter, say this?

A few other recent examples came to mind, prompting similar questions. In recent months, I’ve heard: “Lobster’s night” (can a lobster own the night?), “Car’s Keys” (can a car own keys?), “Water’s bottle” (can water own a bottle?) How about a dress? Can it own a wedding, as in “wedding’s dress”? For that matter, although the general can certainly own the motor, in the case of, “He works at General’s Motors,” he clearly doesn’t because it is a privately held, publicly traded corporation with a CEO instead of a general.

These might seem like absurd questions, but they logically follow from a certain misguided grammatical structure frequently used by English language learners. I hear this error a lot. In both written and spoken English, it’s very common among my students and friends who are studying English, especially those whose native languages are Chinese, Korean and Japanese. The guilty structure is the use of false possessives. Rather than a possessive, what they should be using is something called a noun adjunct. Never heard of it? Maybe this is the problem. Because it is typically not taught to learners, they don’t even realize the need for it. Instead, they turn to the possessive structure. The thing is, the noun adjunct is extremely common in English usage. It’s everywhere. The problem, too, is exacerbated by translation. Some linguistic and sociocultural features of Asian languages just don’t survive the translation process, resulting in oddities such as water’s bottle, school’s book, fear’s power, baseball’s cap, Vancouver’s photo, computer’s screen, winter’s coat, car’s keys, snow’s tires, school’s policy, Tuesday’s evening, wedding’s dress, General’s Motors, lobster’s day, and of course, the aforementioned plastic’s fork.

Clearly, this is a case of ENGLISH WEIRDNESS. So let’s get after it.

We’ll first need to go back and review what we know about possessives. This is an unfortunately named grammar point because ‘possessives’ do not strictly speaking always indicate possession. A better word for them might be integral relations. This implies other aspects of possession such as the sense of ‘belonging’ when we consider an expression like ‘my arm.’ I don’t really own my arm, since I never paid for it. Rather, it is part of my body; it belongs to my body, which belongs to ‘me,’  whatever that is. Such existential questions, though, are for another day. In grammatical terms, all of this weirdness belongs to the syntactic category called genitives. According to grammarian Lynn M, Berk, only a very small number of the overall genitive structures express a true possessive that can be understood as meaning to have or to own. Furthermore, Berk says,

“as a result of language contact between French and English after the eleventh century, Modern English uses both the inflection and the preposition to mark the genitive relationships.”

This means that we see the inflection of the noun with the apostrophe ‘s’ as well as the use of the preposition ‘of’ to express possessives, true, but also a wider range of genitive relationships. This is where we can see how integral relationships, such as the one I have to my arm, in use. When we want to express that one noun belongs to another noun, we can use either:

These are the commonly understood usages that express possession and/or integral relation. And in many cases, they are completely interchangeable; we can choose either means of expressing the genitive with no loss of semantic meaning. But they don’t work for every possible noun belongs to noun combination. In fact, we can only use EITHER  of these two structures when we mean to express the following genitive meanings:

*It has become common usage to refer to the parts of some inanimate objects, perhaps due to their similarity in structure to the above ‘parts of the body’ criterion, as belonging to that object’s ‘body.’

She goes on to list examples such as, “Teresa’s book, the dog’s dish, the bird’s perch,” which would seem awkward expressed in the prepositional structure.

in contrast, nouns low on the animacy scale, abstract concepts or inanimate objects, can not logically seem to possess. It makes sense; they are abstract or inanimate and so have neither money to buy, nor hands to hold another noun. In such cases, only the prepositional structure makes sense.

And here’s where things get weird, again, especially for Asian learners of English. Often to such students, these above structures intuitively, at least, seem acceptable. This is related to both the way their languages operate ideogrammatically and in juxtapositional syntax (using Chinese characters), as well as Eastern spiritual/philosophical belief systems about the animated nature of what Westerners would normally consider inanimate objects. In other words, for some learners, any noun is capable of possessing another noun. This causes problems when they attempt to translate this cultural and linguistic logic into their new English.

Consider the following example from the Japanese:

In Japanese, possession and integral relation are both indicated by using the genitive marker ‘の’.  I’m not picking on Japanese here, but since I have some familiarity with that language and not the others, I’ll go with it. Rest assured, similar markers apply in Korean and Chinese too. Anglicizing it, we get something like:

Semantically, (in terms of meaning) this can be translated either as “Tommy’s DVD” or “the DVD of Tommy”. Here, genitive possession is 100% reversible with no loss of semantic meaning. And, more importantly, the DVD truly does belong to AND is owned by, Tommy. Here, true possession clearly applies. However, this reversibility does not always directly translate into English. It only works with the above initial list of categories of genitive meaning. But this doesn’t seem to stop the English learner from using it for other syntactic relationships that to them appear to be genitive but are not. Consider a photograph of a town called Vancouver that someone posts on Facebook:

But when they attempt to translate this into English, they all-too often end up saying:

Often, such students feel the need to put an ‘s’ at the end of the first noun, because they feel like whenever two nouns are together, they must express either possession or integral relation, or even countability (‘Here is Vancouvers photo’). But this is simply not the case. The possessive does not actually make sense, because Vancouver does not ‘own’ the photo. The student who took the picture owns it. Therefore, possession does not work. Being the name of a place noun, “Vancouver” is low on the animacy scale. Therefore, we should only use an ‘of’ pattern to describe what type of photo it is.

“Here is a photo of Vancouver”

It turns out that this structure, despite being a noun + noun structure similar to genitive, is not in fact a genitive structure at all. Thus it absolutely is not a member of the possessive subset of genitives. This is another, often overlooked structure using two nouns. It is one most students, especially Asian learners, almost never use. They incorrectly assume that because there is a noun + noun structure here, it must be a genitive. It isn’t. It is however, extremely common in English. It is the noun adjunct.

A what? Well, the writer is not actually expressing either possession or integral relation. There’s nothing genitive about what’s going on here. What they are doing is modifying a noun by using another noun (ie: power, happiness, memory, garbage, dream, freedom). The first noun is, in fact, modifying the second. In other words, it is functioning like an adjective. There is no possession whatsoever implied here. Instead, the communicative implication is that the first noun is describing the second.

In this pattern, where no legitimate adjective form is available, the first noun can act as an adjective. And since adjectives can NEVER be plural, no ‘s‘ can be added to the  first noun.

Since the 2nd noun is the one acting as the main noun, is it is the only one that can be plural.

This is the structure that resolves the problem facing Asian learners. By using a singular noun before another noun, with no such marker between them, as in the Japanese ‘no’ (の), a semantic adjective-noun structure is produced.  And again, this is extremely common in the English language. Consider the examples:

Clearly, the car doesn’t own the keys, I do. Nor does baseball own the cap, its wearer does. And you know a wedding can’t own the dress, although a beautiful dress might be said to ‘own’ the wedding, figuratively speaking.

These make no sense as possessives. Yet, they are all structures I have heard students use in the possessive, noun + apostrophe + ‘s’ structure in recent months.

In another recent example, I saw a selfie that a friend posted on Instagram, featuring a photo of her holding a large food platter upon which a cooked lobster was displayed, ready to be cracked open and eaten. Her caption read:

The common English idiom, “It’s my day” typically means that it is “your lucky day.” My friend evidently meant to use a noun adjunct to describe which special menu day it was at that particular restaurant, something like, “It’s lobster day at the restaurant.” For the poor lobster, quite obviously, it is anything but its lucky day.

As for the fork, I ended up using the fork the young man had offered me, and I was able to fully consume the remaining chili fries. I asked if he was a student somewhere nearby.  He told me he was studying at _______ language school. I told him I had heard that was a good school, and thanked him for letting me use his “plastic fork.”

Can you see any noun adjuncts around you? Now that you’ve read about noun adjuncts, I am sure you’ll see and hear them everywhere. Sometimes, they are right in front of you, as were my… 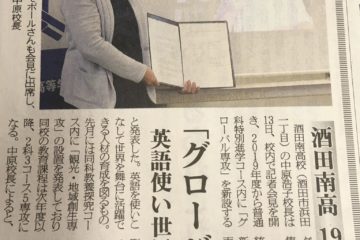 Paul is a Canadian English instructor who teaches and writes from Vancouver. He writes articles, essays, fiction, meditations on the irregular workings of English, and also makes videos. He is also available for online video tutoring.